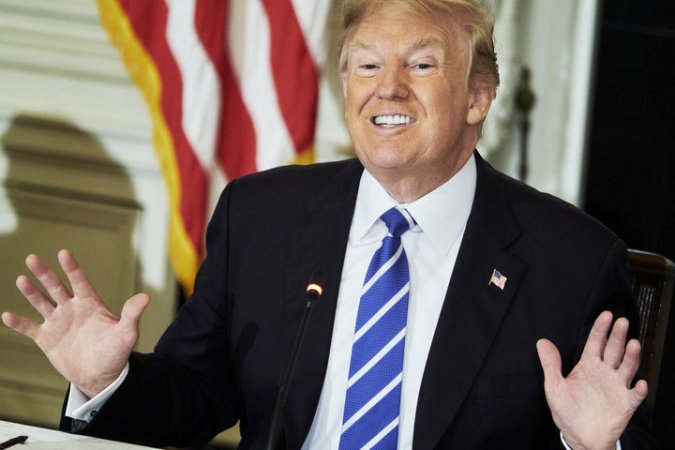 He made many promises to the working people of our country. And millions voted for him believing he was ‘one of us.’ That was all a guise to get himself elected president. Now we are seeing the real Trump: indifference to the plight of the non-rich:

When he began his presidential campaign, Donald Trump promised to “save Medicare, Medicaid and Social Security without cuts.”

This is a promise, however, President Trump would like to break. Trump’s 2018 budget proposal that would cut all three programs, which help the most vulnerable in American society, by billions of dollars.

And nothing will do more damage to America than the massive debt being accumulated by Trump. And he seems to show no concern for what he’s done:

In the first budget cycle fully under their control, Trump and the Republican-run Congress are likely to run a deficit that will top $1 trillion, some two-and-a-half times as big as the one Trump had complained about at his Sept. 30, 2015, rally in Keene, New Hampshire.

And given how sharply the just-passed tax cuts will reduce revenue in the coming years, those $1 trillion annual deficits could well extend through Trump’s remaining three-to-seven years in office.

“He tried to make it seem that he could cut taxes, raise spending and eliminate deficits all at the same time, to make it seem like he’s a miracle worker,” said Collender, a longtime former congressional budget committee staffer. “It’s impossible. People who believed him really don’t understand how things work.”

Avoiding $400 billion annual deficits was just one of several promises Trump made on the campaign trial regarding federal spending. Trump told conspiracy theorist Alex Jones in December 2015 that if the country didn’t “balance up” its budget soon, “we’re not going to have a nation anymore.”

He even goes after one of America’s greatest achievements: the U.S. space program:

“The budget proposes to end direct US financial support for the International Space Station in 2025, after which NASA would rely on commercial partners for its low Earth orbit research and technology demonstration requirements,” according to the White House proposal, which was released on Monday.

But nothing shows more contempt for the poor than Trump’s plan for the poorest in our society:

Facing a trillion-dollar deficit because of his just-passed tax cuts, President Donald Trump has an idea for how to get some of that money back: making poor people eat beans and rice.

In a symbolic budget proposal unveiled Monday, the Trump administration called for sharp spending reductions in a variety of anti-poverty programs. In addition to a steep 25 percent cut to the Supplemental Nutrition Assistance Program, commonly known as food stamps, Trump would fundamentally alter how the program works.

Currently, SNAP gives 42 million Americans a food voucher worth $125 per person that can be redeemed for almost any food product in a grocery store. It’s one of the most important safety net programs in the U.S.

“Under the proposal,” Monday’s budget document says, “households receiving $90 or more per month in SNAP benefits will receive a portion of their benefits in the form of a USDA Foods package, which would include items such as shelf-stable milk, ready to eat cereals, pasta, peanut butter, beans and canned fruit, vegetables, and meat, poultry or fish.”