What is the purpose of bodycams if they are not turned over to the public? They should be required to do so. This is farce. We know cameras are important in holding cops accountable:

We have a long way to go:

Three Colorado police officers were fired and a fourth resigned after they shared photographs they took of themselves re-enacting a chokehold officers used to subdue a Black man who later died, authorities said on Friday.

Vanessa Wilson, interim chief of police in the Denver suburb of Aurora, called the officers’ actions surrounding the death of Elijah McClain, who was unarmed, “reprehensible.”

“I am disgusted to my core,” Wilson said at a news conference announcing the firings.

The officers who were terminated were named as Jason Rosenblatt, Erica Marrero and Kyle Dittrich. The fourth officer, Jaron Jones, resigned on Tuesday.

One photo depicts Dittrich and Jones recreating a carotid neck hold, while a grinning Marrero stands nearby. The pictures, which were released on Friday by authorities, were taken near the site where the fatal struggle took place.

And the numbers keep growing. This is essentially a war. The government is still essentially allowing it to happen. Unless you want to believe that the police have taken over the government:

Police across the U.S. violated the human rights of peaceful protesters, journalists and bystanders more than 100 times during protests sparked by the death of George Floyd, according to analysis by Amnesty International.

The organization has documented 125 separate instances of police violence against people in 40 states as well as Washington, D.C. between May 26 and June 5—a period in which hundreds of thousands of people took to the streets across the country to protest police brutality and racism following Floyd’s death after a white Minneapolis officer kneeled on his neck for eight minutes and 46 seconds.

On Tuesday, Amnesty International launched an interactive map marking incidents of unlawful use of force, which included beatings, misuse of tear gas and pepper spray and the firing of less-lethal projectiles such as rubber bullets. The abuses were committed by officers from state and local police departments, federal agencies and the National Guard, according to Amnesty International.

Why did it take so long for him to be arrested? The video. No video, no arrest:

In particular, the politicians are to blame because they a beholden to the police unions and their campaign cash:

Police unions have emerged as the leading opponent of reform efforts as lawmakers respond to weeks of protests over the police killings of Black people across the country.

Despite years of demonstrations against police violence, data shows that law enforcement agencies killed more people last year than they did five years ago. Black people are killed at a far higher rate than white people.

The rise comes even as violent crime has plummeted across the country for decades. Despite the falling crime numbers, America’s policing budget has nearly tripled over the last 45 years.

Looking at the historical data, researcher Lyman Stone, a former federal economist who now serves as a fellow at the conservative American Enterprise Institute, found that police killings mostly fell between the 1960s and the 2000s but have been at high levels ever since.

“The pace of increase has been especially dramatic since 2002,” Stone wrote. “This calculation shows the frequency of police killings has risen by much more than criminal or terrorist violence, which suggests that rising police violence is probably not a response to rising criminal violence.”

Abuse by police in Baltimore is criminal:

A Baltimore police officer accused of assaulting a bystander is the city’s highest-paid employee.

A Baltimore police officer accused of assaulting a bystander is the city’s highest-paid employee.

Newberg has been suspended without pay since his arrest in June. Body camera video shows him chasing down and arresting a pedestrian who criticized his behavior in May. The 24-year department veteran has been charged with assault, false imprisonment and misconduct.

This cop shot an unarmed black man in the back as he was running away. We’ve heard it before. Law enforcement now feels entitled to shoot someone in the back since the system does not punish it:

We live in terrible times. In where those entrusted to protect us are terrorizing our citizens:

Protests erupted for the fourth straight night Friday in New Haven, Connecticut, after police opened fire on a car near the Yale University campus, shooting and wounding a woman inside.

Stephanie Washington, 22, was hospitalized with non-life-threatening injuries following the shooting by an officer from Yale and another from the adjacent town of Hamden, university officials said in a statement.

“No weapons were observed at the scene,” Connecticut State Police Sgt. Dwight Washington said in a statement.

“I am so deeply sorry to the individuals who were involved that this ever occurred,” said the mayor of Hamden, Connecticut. 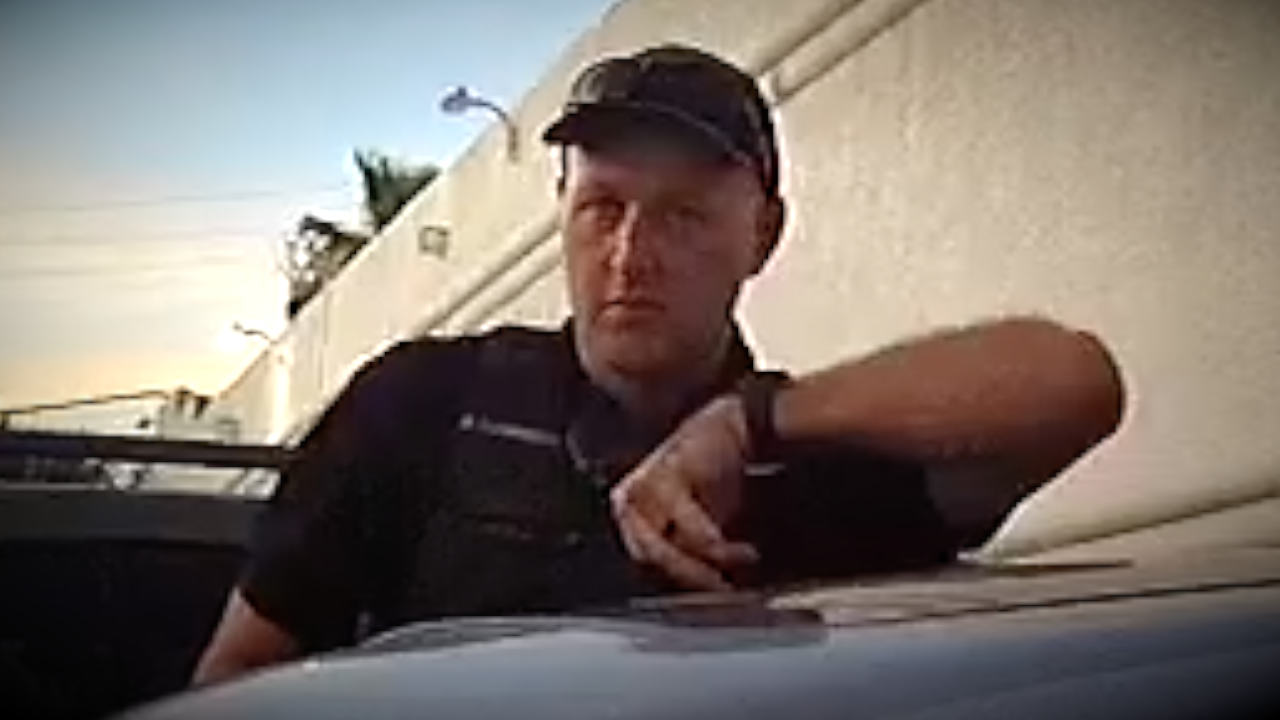 Many hoped that bodycams would serve as deterrent to police brutality. It hasn’t. It continues unabated. There is no longer any doubt that we live in a police state, where the rights of law abiding citizens mean very little:

On July 27, 2017, Johnny Wheatcroft was a passenger in a silver Ford Taurus when a pair of Glendale police officers pulled in front them in a Motel 6 parking lot.

The stop was for an alleged turn signal violation.

Minutes later, Wheatcroft was handcuffed lying face down on the hot asphalt on a 108-degree day. He’d already been tased 10 times, with one officer kneeling on his back as another, Officer Matt Schneider, kicked him in the groin and pulled down his athletic shorts to tase him a final time in his testicles, according to a federal lawsuit and body camera footage obtained by ABC15.

The scene was witnessed by his 11- and 6-year-old sons.

Multiple independent law enforcement experts, who agreed to review the incident, said the officers’ conduct was unlawful, potentially criminal, and one of the most cruel and troubling cases of police misconduct they’ve ever seen.

Here we have another mindless example of an innocent person being blown away for no reason whatsoever. The only difference in this case: he was white. Normally it’s a black person that is shot in cold blood. We’ve seen this too often to draw the obvious conclusion. Law enforcement in America is broken. The training of police (if there is any) is all wrong. Cops are being trained as if they are going to war. Policing is not the same. That also could be the result of police coming from military backgrounds. Whatever it is, there must be change. And is typical with government, there is no one demanding that happen:

The 17-year-old was home alone when officers were called to the red-brick house to check on him after he’d allegedly threatened to harm himself on FaceTime.

…Officer Clayton Jenison allegedly “acted recklessly and deliberately” when he shot 13 times at Albers, who may not have even known police were at his home, according to a federal lawsuit filed Tuesday by his parents. The boy was “simply backing his mom’s minivan out of the family garage,” the complaint alleges.