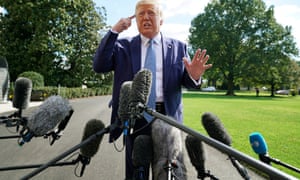 This is why the possibility of the 25 amendment being invoked is realistic. Pence realizes that Trump will destroy him in a heartbeat. He’s done it to his closest allies. So why not him:

There are two ways of looking at Donald Trump’s astonishing response to the Democrats’ attempt to impeach him. Either Trump has finally lost the plot or else he has just guaranteed himself a stunning victory in next year’s presidential election. Whichever view is correct, both signal a rising sea of troubles for the US and the world.

Suggestions that Trump has no idea what he’s doing were reinforced by some unhinged behaviour last week. His ranting about traitors, spies and low-life at a White House event was utterly bizarre, reviving claims that he is unfit for office.